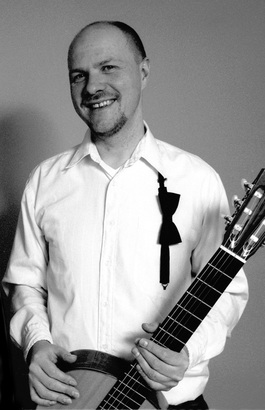 Nick Chamberlain P.G.C.E. BA(Hons). G.B.S.M. A.B.S.M. offers tuition in classical guitar and composition. He has 25 years experience teaching privately and in state and private schools. He is a member of the Incorporated Society of Musicians and Sound and Music.

Over the years Nick has taught many students to Grade 8 and Performer's certificate and several of his students have gone on to study guitar at music colleges. Most recently (June 2014), one of his advanced students went on to study with Craig Ogden at the Royal Northern College of Music.
In December 2015 a Trinity College Exhibition Award was granted to one of Nick's grade 5 students who attained one of the highest scores in their grade in UK and Ireland. More recently Nick's classroom teaching has been video recorded for Reel Learning, an online professional development platform. Reel Learning was nominated for a Royal Television Society award in 2016. In July 2019, The Birmingham Schools' Guitar Ensemble were invited to perform at the National Music For Youth Festival at Town Hall, Birmingham.

As an SPNM (now Sound and Music) shortlisted composer, he was selected for the Adopt-a-Composer scheme in 2009. The piece he created for the scheme was broadcast on 'Performance on 3' in 2010. He writes classical ensemble pieces and guitar tuition material.